Unexpected mutations were expected and unrelated to CRISPR 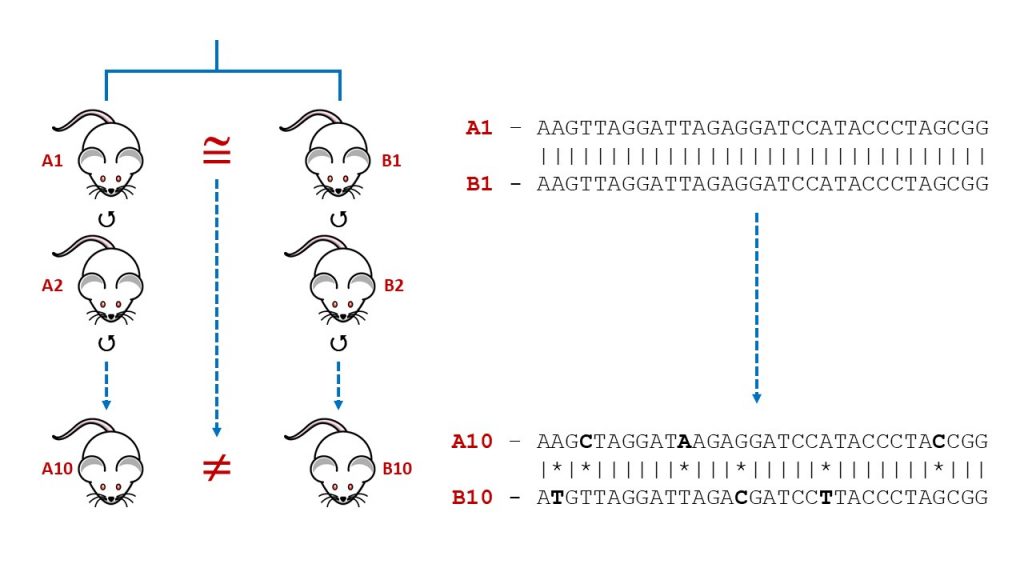 Scheme illustrating the effect of spontaneous mutations and genetic drift responsible for the divergence of animal subcolonies bred independently (Figure from Montoliu and Whitelaw, Transgenic Research, 2018, online May 31).

Bruce Whitelaw (The Roslin Institute, Edinburgh, Scotland, UK) and I, we have just published a commentary in the scientific journal Transgenic Research discussing the case of the Nature Methods paper by Schaefer et al. 2017 who initially reported the identification of numerous off-target sites altered after a genome-editing experiment in vivo, in mice. This paper has recently been retracted by the journal (March 30). As indicated by the authors in this commentary: “The most plausible explanation for the vast majority of the reported unexpected mutations were the expected underlying genetic polymorphisms that normally accumulate in two different colonies of the same mouse strain which occur as a result of spontaneous mutations and genetic drift. Therefore, the reported mutations were most likely not related to CRISPR-Cas9 activity.“

Today, the scientific journal Nature Methods, retracted a publication by Schaefer et al. that appeared on 30 May 2017 claiming to have found numerous unexpected mutations after a CRISPR-Cas9 experiment in vivo, in mice. The unexpectedly high number of off-target mutations reported in the study caught the field by surprise, where noone else appeared to have found similar data. However, this was a most relevant issue, should have been true, directly affecting the expectatives of the CRISPR-derived uses and applications. That publication negatively impacted in the nascent field of genome editing applications, particularly those related to biomedicine, to develop innovative gene therapy approaches. However, almost immediately, many groups around the world expressed doubts and critized the experimental design of the study and the interpretation of the observed results. Soon thereafter, several manuscripts and publications were released with more plausible alternative explanations (low number of cases analyzed, mice genetically unrelated, persisting Cas9 expression…). Anyone interested to review a timeline of events associated with this publication can visit the corresponding section of the CRISPR web at the CNB-CSIC, maintained by Lluis Montoliu.

Eventually, today, Nature Methods adopted an Editorial decision and retracted this publication, with the agreement of two of its authors and the disagreement of the rest, including the first and last author of the study. This was the most logical and expected decision. Simultaneously, Nature Methods has released five different responses from five independent laboratories, experts in the field of genome editing, with alternative explanations for the original study, now retracted.

The first phrase of the Editorial Retraction note explains this decision: “This paper is being retracted because the genomic variants observed by the authors in two CRISPR-treated mice cannot be conclusively attributed to CRISPR–Cas9.“. In other words, the most plausible explanation for the original findings were the underlying genetic differences between control and experimental mice, in principle derived from the same genetic background, but in reality selected from unrelated, and hence, genetically different, mouse colonies. 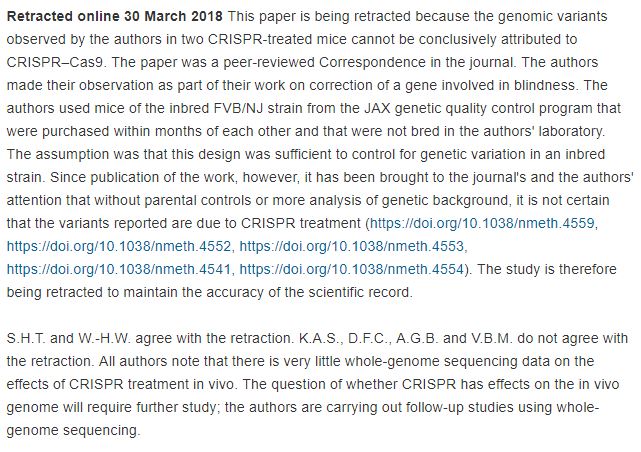